In conjunction with the second ever White House Astronomy Night, Sandy Eulitt of Stellar Experiences, will conduct a free public star party type event on the night of Monday, October 19, 2015 at a San Diego astronomy compatible location.

To receive details on the FREE Public Star Party that will be held, sign up here: Get White House Astronomy Night location details. Due to weather, marine layer, light pollution, and other factors, it is not possible to confirm an event location until within a few days of the event. Therefore, I have people sign up to receive an email from me, which will be sent within 24 hours of the event. We will have a waxing crescent Moon, just shy of a first quarter Moon 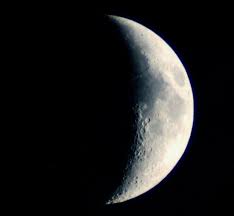 Moon as it will appear for White House Astronomy Night, October 19, 2015

The event will be held at 7 pm, October 19, 2015 at a dark sky site in the San Diego metropolitan area. Moonset will not occur until 11:29 pm that night, though the local horizon may enable it to be obscured by about 10:30. This will preclude viewing of the western sky, as the moonlight will wash out any constellations or deep sky objects in that area. Viewing of the northern sky, including the Summer Triangle, Double Cluster in Perseus, Andromeda Galaxy, M13 in Hercules, M15 in Pegasus, and other faint fuzzies should still be possible. To enhance viewing of deep sky objects, a dark sky site in East San Diego County may be chosen.

Children are welcome. Please bring a chair, a warm jacket and/or blanket or throw, a warm beverage if so desired, snacks, and any questions about space, astronomy and STEM Education subjects of physics, math, and chemistry. Alcohol is strictly forbidden at San Diego area parks.

Astronomy is a Gateway Science

Astronomy is long known as a gateway science, as are meteorology, archeology, and geology. A gateway science is simply a science that the general public is interested in, that inspires deeper discussion and study of physics, math, biology, and chemistry. The latter four are so-called “base sciences,” meaning that there is no underlying subject to those. A gateway science can be thought of as a public facing science, one which the general public encounters everyday, but which they, often, do not realize encompass the underlying sciences of math, physics, chemistry and biology.

Get More Astronomy and Space Information

To receive even more astronomy and space information, product discounts, announcements and promotions, and VIP event notifications, sign up here: I Like Discounts and Events